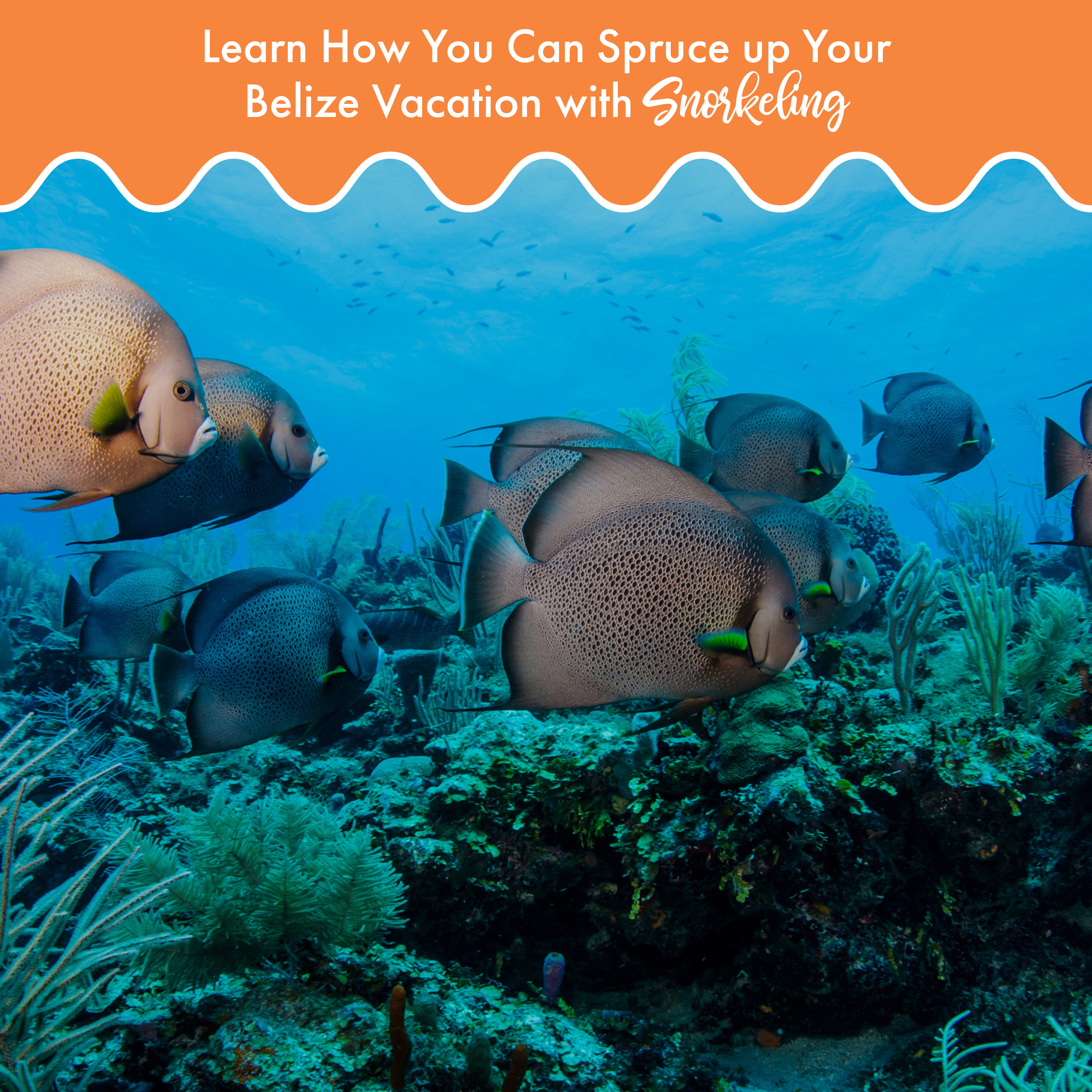 Learn How You Can Spruce up Your Belize Vacation with Snorkeling

Belize is a fantastic destination for snorkeling, for several reasons.  The first is that the entire country of Belize is bordered by the Belize Barrier Reef, the largest barrier reef in this hemisphere.  Another is the convenience of staying on Ambergris Caye with a variety of resorts, dining options, and tour operators.  The third is that the snorkeling conditions are almost always good, with warm water and high visibility year-round.  And finally, the wide variety of marine life means that the eye candy while snorkeling is always a stunning feast.  Add a Belize snorkeling tour to your vacation and enjoy the underwater backyard of the Belize Barrier Reef.

Snorkeling tours are typically a half-day, running in the mornings and afternoons.  Snorkeling gear is provided with the tour, along with water, fruits, and an experienced snorkel guide.  Snorkel tours start right on the dock at your resort where you are fitted with gear and hop on the boat to your snorkeling site.  There are many snorkeling sites that are accessible when staying on Ambergris Caye.  Two of the most popular are Hol Chan and Mexico Rocks.  Both sites are part of the Hol Chan Marine Reserve, first designated in 1987 and now totaling some seven square miles of protected marine habitats.

Hol Chan, meaning “Little Channel” in Mayan, is located south of Ambergris Caye.  The snorkeling there starts in the flats where short turtle grass is growing, providing an important habitat for many marine species and a large part of the diet for sea turtles, hence the name.  There are often Green Sea Turtles in the area, feasting on their lunch.  From there, you move on to the cut, where the coral reef starts.  Your guide will point out the different fish, coral and marine creatures that are visible as you float at the surface.  The tour circles through the reef and ends up back at the boat.  An optional second stop at Shark & Ray Alley where you can swim with nurse sharks and stingrays follows the traditional snorkel stop at Hol Chan.

Mexico Rocks was added to the marine reserve in 2016 and is located directly in front of Costa Blu Adults Only Beach Resort, making it a very convenient choice.  The unique boulder coral formations, found in only one other location in Belize, far to the south at Glover’s Reef, set this site apart from the others.  The close proximity to the resort also means that you can go from dock to reef in a matter of minutes.  Similar to at Hol Chan, the tour starts in shallow water and then proceeds to the coral reef.  There are large schools of fish to be seen here, as well as sea turtles, spiny-tail lobster, stingrays and healthy growth of coral.  The large boulders of coral dot the seafloor- make sure to snorkel all the way around them and look in every cranny for tiny creatures like Christmas tree worms and sleeping nocturnal squirrelfish.

When snorkeling, always remember not to interfere with any of the wildlife or coral.  Refrain from touching anything, for both your safety and the safety of the creatures and environment.  Tempting as it may be to swim along with a turtle or try to get close to a stingray, keep your distance and enjoy the views without chasing, touching, or adding undue stress to the animals.  Treading water vertically while wearing fins stirs up a lot of sediment, which can then smother the coral.  Instead, try treading water while lying on your side with your head out of the water and your feet kicking slowly next to you.  And of course, never throw garbage or food waste into the water, as it can impede the natural feeding habits of marine life.  Grab a reef-safe sunscreen for your trip to Belize, to make your snorkeling adventure safe for both you and the coral.

Whether you snorkel for the first time in Belize or are already experienced, the reef system found here is sure to stun.  There are many other sites for Belize reef snorkeling to explore other than the two discussed here, though these are a great place to start.  For the adventurous, or to shake things up a little, you can even try a night snorkel at Hol Chan, where a whole host of nocturnal creatures light up the reef.  You won’t Belize it!  To book your snorkel tour today, click here.