Have you ever wondered about animal couples? There are quite a few creatures out there that mate for life, or for a very large chunk of it, anyway. Belize is home to many of these and there’s no better way to see for yourself than to plan a snorkel or dive trip.

Learning new facts about even the most common animals in the sea makes the experience that much more rich. I feel as though I am seeing old friends and enjoy unlocking the many intricate links to what I am seeing. As it is February, and the month of love, this week let's take a closer look at ten species you are sure to see above and below the reef in Belize that practice some form of monogamy in their reproductive cycle. To up the romance level, take your partner along on your next dive and keep your eyes open for these marine couples. 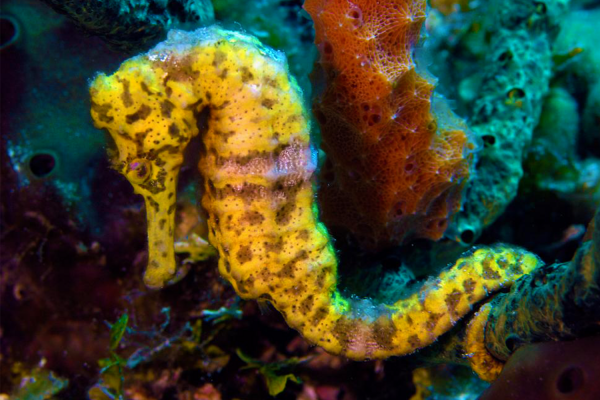 There are three species of Seahorse present on the Belize Barrier Reef and all of them are monogamous. The Dwarf, Lined and Longsnout Seahorses are all happily paired up. Being fairly unproductive swimmers, part of the equation is that it is often not practical to swim off in search of a new mate. Of course, the males famously give birth to the young, in a rare role reversal known to very few animal species. Brown Pelicans, with their goofy profile and awkward dive landings, have long been a favorite seaside sighting. Little did I know that these often comical critters have a romantic side as well. The male attracts his mate with a nesting site, and assists her for the week it takes to construct their literal love nest. He fetches branches, increasingly smaller in size until she has masterfully woven them into the perfect protective space and both parents take turns incubating the eggs with their feet. Brown Pelicans are known to be monogamous for the duration of the mating season, but all bets are off for the next year. The stately French Angelfish are almost always seen in pairs. They defend their territory and feed together regularly. While these fish reproduce by broadcast spawning, that is, the female and male release eggs and sperm at the same time into the water, they do so only in pairs. Typically, broadcast spawning is done in large aggregations. 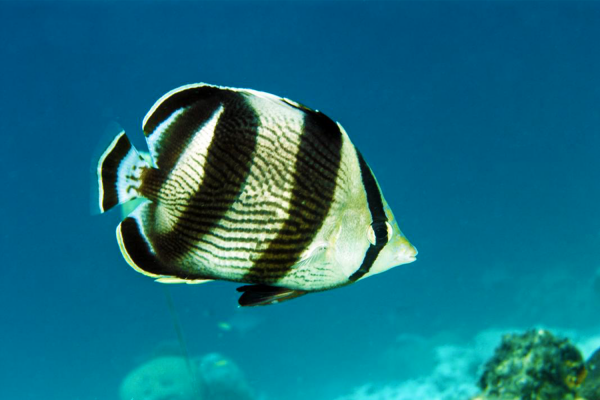 Banded Butterflyfish are some of the cutest little fish to spot on the reef. Their stripes and bold colors make them stand out, and the bonus is that you are almost always treated to a paired set. Like the French Angelfish, these little couples utilize the broadcast spawning method for reproduction, but only with their partner. Bringing our attention back above the reef, Laughing Gulls can be identified by their distinctive call, hence their name. These boisterous birds are often seen in large flocks and have a complex hierarchy that utilizes ritualized displays to keep the order. Males and females form monogamous pairs that generally last for several mating seasons. Like pelicans, the male gulls bring nest-building materials to the female while she takes care of the construction. 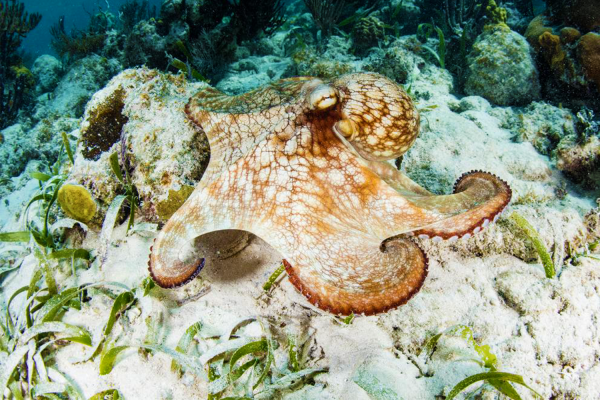 The more scientists discover about Octopi, the more complexities we learn. These creatures are highly intelligent, can utilize memory and have an acute sense of touch. The Caribbean Reef Octopus is another species, and the only invertebrate on this list, that forms long-term couples. In a tragic ending, the female dies shortly after laying her eggs, and the male often does not take another mate. Ospreys are magnificent raptors and there are several resident birds on Ambergris Caye. I've long since admired them but only recently learned that they mate for life. Recent research aims to discover though if it is the mate, or the nesting site, that holds the loyalty of these birds of prey. The Osprey can be found on every continent except Antarctica, making them one of the most widespread raptors. Keep an eye out in your home area, you might see an unexpected reminder of your Belize adventures if you spot an Osprey there. Last, but not least, is the Cleaning Goby, in the Elacatinus genus. These bright little fish have the unglamorous job of cleaning larger fish, but it's quite entertaining to spot a cleaning station and just watch the fish cycle through. These gobies even work together, with mated pairs keeping post at the same cleaning station. Both sexes will drive away intruders, being highly territorial.

The natural world is full wonders and the most magical one just might be love. On your next dive trip in Belize, watch for these cute couples.

A special thanks to Oceana Belize for capturing these beautiful images of our Romantic Couples!