Step back in time as you explore the Belize Maya ruins on your vacation. The well-preserved sites are open to visitors year-round. The ancient Maya people lived throughout Mexico and Central America, and all over Belize. Modern-day Maya still lives here and are an important part of Belizean culture. In Belize, there are three Maya groups- the Yucatec, Mopan, and Kekchi. The culture and population were at its peak from 600-900A.D., and numerous ruins and important historical sites are still easy to visit today. While the full reason for the decline of the ancient Maya is still being parsed out by archaeologists, evidence points to a combination of overpopulation, deforestation, warfare, drought, and the arrival of Europeans as contributing factors. The Maya civilization was quite advanced and included a detailed and accurate calendar. In addition to the many temples and ceremonial centers to be found at the archaeological sites in Belize, the Maya people placed high ceremonial importance on the cave systems found throughout the country. Pottery, stone tools, and other ritual objects have been found deep within the karst cave formations.

The 8 major sites will be discussed here, though there are many other smaller sites, unexcavated mounds and ceremonial sites all throughout Belize. The easiest Belize Maya ruins to visit while vacationing in San Pedro are Lamanai, Altun Ha, Xunantunich and Cahal Pech. These are all done via a day trip to the mainland, starting with an early morning local flight to Belize City. Ground transportation is then provided to the archaeological site, with a guided tour, lunch and return flight back to the island. There is also the option to combine it with another mainland tour, like cave tubing or the Belize Zoo. For more about how to visit the mainland from San Pedro, click here. It is also possible to visit the large site of Tikal, in Guatemala, from Belize. This may best be done with an overnight near Tikal, which can all be coordinated from Belize with your tour provider.

Meaning in English: Water on the Rock
Location: 31 Miles North of Belize City on the Old Northern Highway, Belize District.
Highlight: There are two main plazas with 13 structures in this wealthy ceremonial center. It is easy to travel to, due to its proximity to Belize City. There is a Maya-made reservoir that still holds water today.
Historical Importance: One of the older sites in Belize, evidence showing the use of the area goes back as far as 200 B.C.

Meaning in English: Place of Ticks
Location: San Ignacio Town, Cayo District
Highlight: This ancient city sits atop a prominent hillside in modern-day San Ignacio Town. The juxtaposition of the Maya temples and other buildings, while looking down on the current town, gives you a sense of the sweeping hand of time.
Historical Importance: As one of the earliest Maya settlements in the western part of Belize, Cahal Pech has provided researchers with much information about this time period, ~1200B.C-800A.D. Many ceremonial materials, jade carvings and evidence of trade with groups in Guatemala, Mexico, and the coast have been found.

Meaning in English: Snail
Location: One of the more remote sites, it is deep within the Chiquibul Forest Reserve, near the Western Border, in the Cayo District.
Highlight: This is a sprawling site, with 32 structures, two causeways, and five large courts. Howler monkeys, all three species of toucan found in Belize, oscillated turkeys and more wildlife can be seen here. The view from the top of the largest temple, Caana, or “Sky Place,” is vast and impressive.
Historical Importance: The largest Maya city-state in Belize is Caracol, and it often warred against nearby Tikal, eventually conquering it. Today, the site is 25,000 acres of rainforest that provides homes to many important flora and fauna species.

Meaning in English: Maya Hill
Location: In the Bay of Chetumal on the peninsula across from Corozal Town. Corozal District.
Highlight: The location on the Bay of Chetumal makes this site unique in Belize. The views of the monuments and the backdrop of the water make for an impressive and beautiful sight.
Historical Importance: During the Late Preclassic Period (~350B.C.-250A.D), Cerro Maya had a bustling trading center, important throughout the ancient Maya world.

Meaning in English: Submerged Crocodile
Location: This is a riverside site, on the New River Lagoon. Orange Walk District.
Highlight: A tour to Lamanai starts with a boat ride up the New River, giving you a unique vantage point from which to take in your first views of this site. Many species of wildlife, including Howler Monkeys, can often be seen. Lamanai is a Mayan word for “Crocodile,” and is one of a few Maya sites that is still referred to by its original title. Crocodile motifs and carvings can be found throughout the site.
Historical Importance: It is one of the largest ceremonial centers in Belize. The Mask Temple is aptly named for the large mask carvings adorning it, using a construction technique not often found at Maya sites.

Meaning in English: Place of the Fallen Stones
Location: In Southern Belize, north of Punta Gorda Town, Toledo District.
Highlight: Megalithic terraces can be seen here, as well as many large tropical trees, including the Ceiba, or cotton tree, sacred to the Maya.
Historical Importance: The method of construction here is typical to those of other sites in Southern Belize. The large rocks that for the pyramids are not mortared together, like they are elsewhere in Belize. Originally, structures made of wood and other materials that have since deteriorated, made up the top levels of the buildings.

Meaning in English: The Big Hat
Location: On the Southern edge of the Maya Mountains, just off the Southern Highway, Toledo District.
Highlight: This is a smaller site, with a great view of the valley from atop a hill, making it an easy visit. The longest stela in Belize was found here.
Historical Importance: Of the 28 stellae found here, 8 were carved. There were also two plazas constructed, and a ball court.

Meaning in English: Maiden of the Rock
Location: San Jose Succotz Village, Cayo District, 5 Miles from the Western border.
Highlight: One of the most popular Maya sites in Belize, you can climb to the top of El Castillo for a panoramic view of Guatemala and Belize.
Historical Importance: This site was founded in the Preclassic Era and is roughly a square mile in size. Six plazas and 25 temples were constructed. 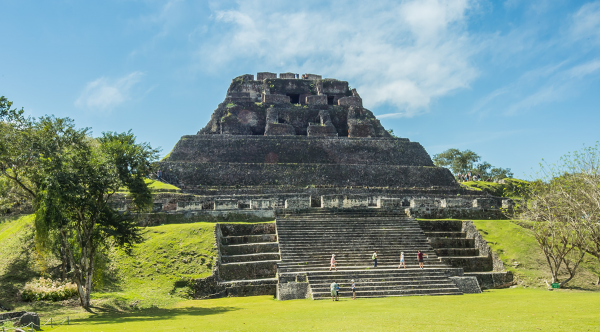 The Maya sites of Belize still hold many secrets that archaeologists are working to uncover. When visiting one of these historical sites, keep in mind that they have deep spiritual and religious meaning to the Maya people. Act respectfully while you explore the grandeur on display, just as you would at any religious site. Wear good walking shoes, as the large steps leading to the top of the temples are quite steep. Enjoy time in these ancient spaces, and soak up the knowledge that your guide has to share about this fascinating culture, and its importance to Belize.