I first saw a Lionfish in Belize on the reef near Tobacco Caye in 2010.  It paraded about the coral in full splendor, it’s red-striped fins dancing with the waves.  Though gorgeous in its own right, this predator was alarming to see. Indigenous to the North Pacific, these brilliantly decorated fish are popular aquarium showstoppers that have unfortunately taken up residence along the southern coast of the USA and the Caribbean.  They are the poster child of an invasive species.  According to NOAA’s Ocean Service, “An invasive species is an organism that causes ecological or economic harm in a new environment where it is not native.”

Evidence provided by NOAA speculates that this invasion stemmed after just 6 Lionfish made their way out of an aquarium in the aftermath of Hurricane Andrew in 1992 off the coast of the USA.  There is also the strong possibility that individuals were released intentionally when no longer wanted in aquariums.  Whatever the original cause, they have rapidly spread.  It can be a little wild to think that just a handful of Lionfish could spread so widely.  However, they are prolific beyond belief, with one female capable of spawning 2 million eggs per year.  With a reproductive rate that high, and with no natural predators in this region, Lionfish have become a real problem.  The Lionfish, Pterois volitans, disrupts that natural order of things on the reef by out-competing native fish for food sources.  Growing up to 20 inches in length and reaching sexual maturity in just one year, they are thought to live up to 15 years.  The young larvae can be spread widely by floating on the tides and currents, allowing the species to spread rapidly.

Issues like this one are not cut and dry and it takes a little ingenuity to help offset the damage.  While it is not likely that they will be completely eradicated, it is certainly possible to control local populations simply by adding it to our diet.  Though there are no natural predators on the Belize Reef, humans can easily fill this role.  Fortunately for us, Lionfish are indeed edible, after the venomous spines are removed.  They fillet beautifully and work well in many dishes.  Restaurants are taking advantage of this and it is becoming more and more common to see daily specials featuring Lionfish.  Local conservation groups such as Oceana, MarFund, Ecomarand the Belize Fisheries Department have begun in earnest to market it as a food source, both for tourists and Belizeans. There are often spearfishing tournaments held with cash prizes for the most caught. 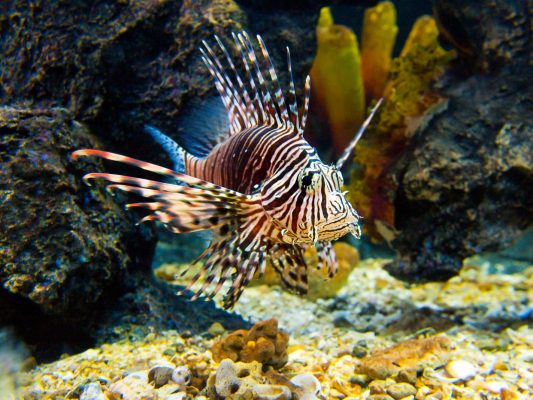 Ecological disturbance aside, it’s easy to agree that the Lionfish is beautiful and holds itself regally while patrolling the reef.  New efforts are using the Lionfish spines as souvenirs, turning them into beautiful decorative jewelry pieces and in turn providing an income source to local artisans.  National Geographic explains more, here.   You can help the effort to control this ecological threat by choosing Lionfish as your meal when it is offered at restaurants and know that it is an environmentally conscious seafood choice.  Consider supporting the local artist trade by purchasing jewelry made from Lionfish. While diving or snorkeling, keep an eye out for them and let your guide or divemaster know about any sightings. Saving the reef has never been easier!