The Caribbean is calling! Belize is home to 170 miles of coastline, with hundreds of islands, or Cayes, (pronounced, “Keys”) dotting the Barrier Reef that runs the length of the country.  With many convenient travel hubs throughout North America, you can be relaxing on the beach in just a few hours.  One of the best parts about a Belize vacation is that no matter the time of year, there is a great chance of warm sunny weather.  A friendly local culture, English speaking and a great resort and dining scene make Belize a great vacation destination.  Inarguably, the main reason visitors flock to Belize is the stunning Belize Barrier Reef that borders the entire coast.  World-class snorkeling, scuba diving, sail sports, and fishing dominate the adventure scene at this hemisphere’s largest barrier reef system.

Belize’s coast and resulting beaches are in direct relation to the magnificent reef.  The coral formations that make up the reef grow very close to the surface in order for the coral to have access to enough sunlight to survive.  The reef, then, acts as a natural breakwater and protects the adjacent shoreline from big waves.  This results in the majority of the beaches in Belize being shallow, with calm water in between the shoreline and the reef, depending on the proximity.  Turtle Grass, named for the gentle sea turtles for which it is a main source of food, is commonly growing in the flats.  The grass flats provide an important nursery habitat for many juvenile marine species which then populate the reef as adults.  The keen snorkeler in the shallows along the shore is sure to see many interesting creatures. Calm, shallow waters and magnificent views of turquoise waves on the reef set the perfect backdrop for paradise.  The best beaches in Belize are waiting!

The Beaches of North Ambergris Caye 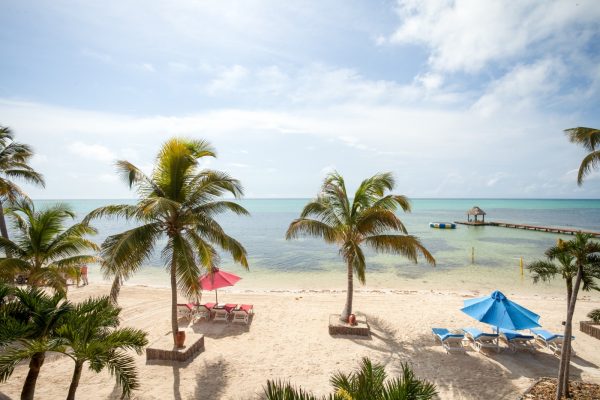 Picture-perfect backdrops just a quick flight from the Belize International Airport await on Ambergris Caye.  It is the largest of Belize’s many islands and is a very popular tourist destination.  The population is roughly 13,000 residents.

Where is North Ambergris Caye?

The island itself is north of Belize City, the best beaches on the island are north of San Pedro Town’s toll bridge.  The island is 25 miles long and less than a mile wide in most places.

The close proximity to both the bustling town of San Pedro with its plethora of resorts, beach bars, and fine dining options; and the Barrier Reef just offshore offers something for everyone.  The beaches on North Ambergris Caye tend to be fairly un-crowded, with the exception being holiday weekends, most notably the Easter weekend.  On the lee side of the island, check out Secret Beach, accessed via golf cart rental and boasting clear, calm and sandy-bottomed water.  For a resort with an excellent sandy beach, try the waterfront paradise at X’tan Ha Resort at Mile 7.2 North.

The Beaches of Caye Caulker

Caye Caulker is laid-back and has a tightknit local village.  Great for families and backpackers looking for an island experience on a budget.  The small island has many hotels and restaurants and is very close to the reef.

Where is Caye Caulker?

Just south of Ambergris Caye, Caye Caulker is also conveniently located in proximity to the International Airport in Belize City.  The island is about 5 miles long and has a population of 2,000 residents.

The beach at “The Split.”  Named for a cut in the island created in 1961 by Hurricane Hattie, The Split is a narrow and deep channel that divides the island in half.  The majority of the island is on the south side of The Split though the north side is slowly being developed in recent years.  The Split has a large sandy area where beachgoers congregate to sunbathe, swim and enjoy a cold drink.  The Lazy Lizard Bar at the end of The Split is a popular watering hole.

The Beaches of Turneffe Atoll

One of three atolls in Belize, Turneffe Atoll is the largest.  In 2012 it was officially made a marine protected area, ensuring the conservation of this incredible natural formation.

Where is Turneffe Atoll?

The atoll is 20 miles off the coast of Belize City, Southeast of Caye Caulker.  It is roughly 30 miles long and 10 miles wide, comprised of a chain of 150 islands, mangroves and reef.

The reef! This is the place to be if you’re looking for island-based scuba diving and Grand Slam fishing- catching Permit, Bonefish, and Tarpon in one day.  The limited number of resorts and the small size of the islands ensures that the area is never crowded.  Turneffe Island Resort, Turneffe Flats, and Blackbird Caye Resort are three of the most popular beach destinations at the atoll.

The Beaches of Hopkins Village

The Garifuna culture is a strong presence in Hopkins and any visit to this beach destination in Belize is sure to be set against the melodies of drums and the native language.  Small in size, with just 1,000 residents, it’s large in hospitality, culture, and tradition.

Where is Hopkins Village?

Hopkins is a rural coastal community in Southern Belize.  With the Caribbean Sea to the East and the Cockscomb Mountain Range to the West, Hopkins is within easy reach of both the sea and the jungle.

Hopkins is the place for you if you are looking for an-off-the-beaten-path beach destination steeped in culture and a relaxed vibe.  The beach at Hopkins is typically wide and sandy, with shallow water stretching out a good distance.  Swimming and relaxing on the beach is a fine pastime in Hopkins.  The majority of resorts and restaurants are to the south of town.  During the offseason, Hopkins returns to its quiet village life.  There is a wide variety of tours available, both marine and jungle adventures like waterfall rappelling, zip-lining and jungle hiking in the world’s first jaguar reserve, Cockscomb Basin Wildlife Sanctuary.

The Beaches of Placencia Village

Placencia has, perhaps, the widest sandy beach in Belize.  The quaint village is chock full of resorts, local shops, restaurants, and many beach bars.  The area of Maya Beach, further up the peninsula, also has resorts and dining options, even a bowling alley for a rainy day.

Where is Placencia Village?

South down the coast from Hopkins, Placencia Village is located at the end of a long, narrow peninsula.  The village itself has about 1,500 residents, while the entire peninsula has a population of roughly 3,500.

The sprawling beach!  You’ll find locals and visitors alike enjoying the expansive public beach on the eastern side of the peninsula.  Known for the narrowest street in the world, Placencia’s quirky boardwalk is packed with interesting shops, art vendors and restaurants.  Try Tipsy Tuna Seaside and Sports Bar or Barefoot Beach Bar for great food and great cold drinks right on the beach.  Dolphins are known to feed in the shallows near the main pier at dusk, a great way to end your day in paradise.