Officially, the language of Belize is English.  Unofficially, it is Belize Kriol.  In the melting pot of culture that is Belize, Kriol is both a people and a language, spoken by nearly all people that call this place home.

It is a mixture of British English and West African dialects, originating in the mahogany slave camps in the 17th century.  Over time, it has grown to be the first language that most Belizeans speak at home, though English is taught in school.  While walking down the street, you are likely to hear Belizean’s speaking Kriol.  Why not try to pick up a few phrases?  Even when not spoken perfectly, it’s sure to be an ice breaker and a great way to start a conversation.

Belize Kriol is a phonetic language, meaning that it is spelled exactly how it sounds, which can be quite confusing for a native English speaker to read.  I’ve found that the best bet is to sound it out, out loud.  By and large Belize Kriol is a spoken language, most modern speakers would be hard pressed to read it fluidly. 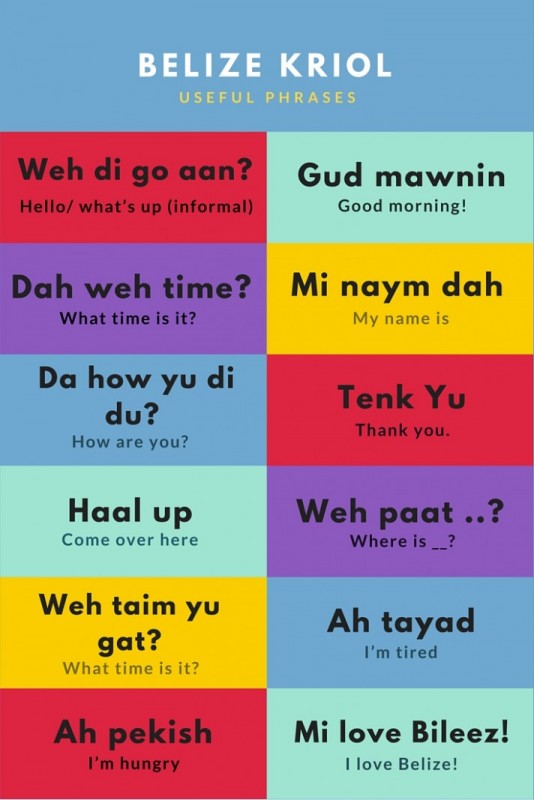 Aside from the obvious differences in grammar and pronunciation, over the years I have found some expressions that always amuse me, as they are familiar phrases but mean something different here.  When a Belizean tells you “right now,” in response to when they are going to do something, it is often a way to placate you and not an actual expression of time.  The saying “the other day” can mean anything from last week to ten years ago.  Coming from the US, both of these expressions frustrated me until I realized their usage in Belize.  After nearly ten years here, I now often say “the other day” in reference to three years ago. Another fun quirk of the language is that instead of using intensifiers, in Kriol you just repeat the word. So “very hot” turns simply into “hot hot hot.”  While many words are just pronounced differently, some are altogether unalike, as in the examples below. 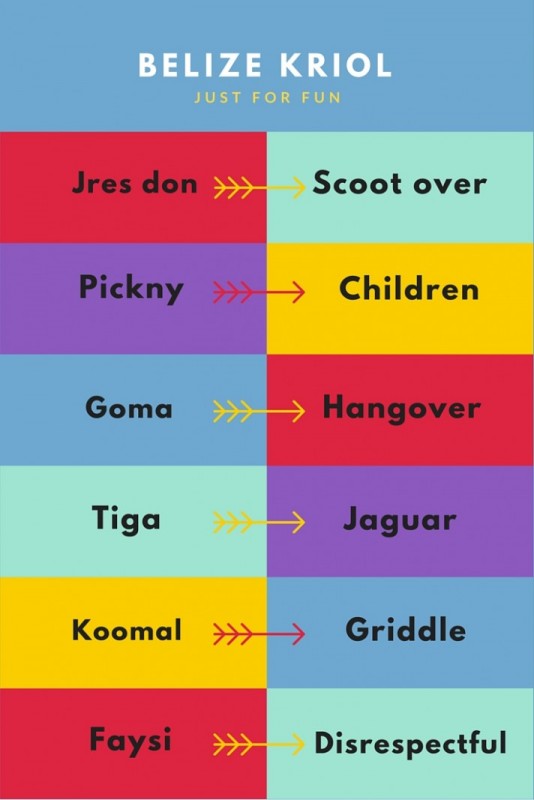 For more fun with words, check out the online Kriol-Inglish Dikshineri to look up the spelling and pronunciation in Belize Kriol, it can be found here.  Further information on the Kriol people and language can be found at the National Kriol Council, here.  I’ll leave you with one of my favorite Kriol proverbs.  Check our Facebook Page to see if you interpreted it correctly!  “Wen fish come fram ribba batam an’ tell yu haligetta gat pain-a-belly, yu mus beleeve anh.”